Back to work this month which led to a distinct down turn in my output. On the plus side I managed to resist purchasing anything!

That's not going to last given the burgeoning Cuirassier Crisis that's building in the Napier household.

Thought I would share progress (or lack there of) on the 13th Cavalry Division for the Great Game: Waterloo Replayed.

So I've introduced a little progress panel on the right hand menu to remind me just how many more I've got to assemble, paint and base.

I still have to purchase most of the figures but I did find an old unopened box of Perrys' plastics lurking in an unloved pile of miniatures in the garage, so the madness has begun!

A Moment of Madness

Finishing projects has always been an issue for me, I'm forever being distracted by the latest shiny toy or niche period.

However, apart from the May trip to Nottingham, I seemed to have got that gene under control somewhat. More painting and less buying, there has even been a game or so actually played in the Napier household and I had grand plans to refight a shedload of 1812 battles in glorious 6mm.

Then I came across the Great Game: Waterloo Replayed a project supporting the Waterloo Uncovered charity which looks to help veterans through battlefield archaeology. The Great Game looks to refight Waterloo in June 2019 with around 80 players taking part.

Before I had given it much thought I found myself in command of the French 13th cavalry division which means I have a lot of 28mm cuirassiers to paint, a lot... three regiments of 37 figures each plus command figures and four 6 pdr horse artillery guns.

Guess that second tranche of  6mm Russian are going to be waiting in their depots for a while yet...
at 19:00 2 comments:

More 6mm infantry to add to the hordes gathering in the garage, this time some 6mm Russian infantry. 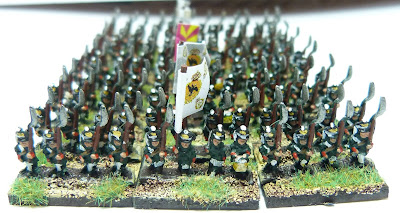 I continued my experiment of using a coloured base coat on these, this time GW's Caliban Green spray was used. Again, I was pretty pleased with the results with most of my mistakes being hidden from the casual observer simply due to the scale of the figures. 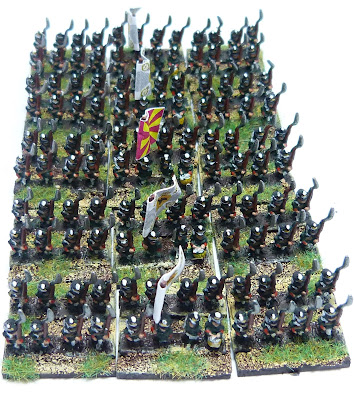 I have been painting my Russian infantry as generic so that they can be added to any unit but of course this is not the case for bases with standards. For reference the white standards represent Siberian regiments and the coloured one a Kazan regiment. The Kazan regiment is still carrying the 1797 issue flag (the others are 1803).

These were part of a productive afternoon of basing I had - note the other regiments were only based by me not painted (see Cheating ).