I like airplanes or at least I like the idea of airplanes. Never really been that keen on flying or at least the type that most of us get to do which is akin to taking a cramped bus; right up to the point something goes wrong.
I've also long had an obsession with the Battle of Britain. The first book I had on the subject was published by Remus and I was given it at age five. Although it had a fair amount of text it was lavishly illustrated in the Commando book style and came with a simple wargame.

Unfortunately, I don't have any pictures of it but I remember the British counters were orange the German an olive green and basically the Germans had to knock out four RAF stations and the British had to knock out the bombers. It was easy and quick to learn and I was still playing it five years later.What I've always wanted to do is track the fate of a RAF squadron through the Battle itself; recording sorties, kills and mourning losses. The closest I have come to that experience was playing the campaign mode of 'Their Finest Hour' a Lucasfilm computer game published in 1989 on my then state of the art Commodore Amiga. If you remember it (and I do fondly) then there is the opportunity to download it and run it on an emulator from a number of abandon ware sites (I don't remember it that fondly) or see just how far things have come on YouTube.

I have attempted in the past to run this campaign but time restrictions have got in the way along with a bit of social life.

Which makes it sound as if I have the time now as I don't really have a social life... this could be true sadly what with age and lockdown(s). So, let's rev up those engines and see where it takes us.
Early on in the piece I decided that although I would try and stick to encounters based on real events, the squadron itself would not be one that fought in the battle. I chose a number which has some personal meaning, 327, and a little research revealed this to be a designation given to a former Vichy French squadron in December 1943.
The next question was which rules. They are plenty out there but I wanted something that was quick, I estimated that even a sortie a day would mean 50+ games, and didn't rely on shooting down every aircraft to determine a winner. The RAF had a high attrition rate but I was looking for a realistic one. Finally it had to be suitable to a bit of solo play. Eventually I decided to try Warlord's Blood Red Skies particular for the boom chit system which gave a mechanic for squadrons being dispersed, running out of ammunition or nerve without much bookkeeping. In addition boom chits in BRS can end a game with no aircraft shot down. The Facebook group for BRS also had a useful download for an enemy AI to help with the solo aspect.
So next thing would be to introduce some campaign mechanics... 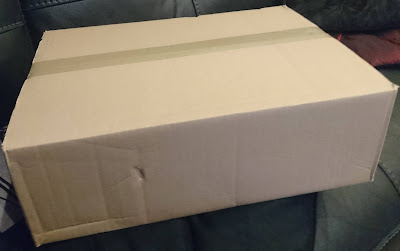 What's in the box?

Every time GW release a new version of Warhammer 40K I immediately pledge not to get sucked in again. I have books that go back to the original Rogue Trader tome from 1987 and given I've only played the game a couple of times in the last decade (solo at that) it should be easy. But... then GW publish another new box set with another collection of fine sculpts and there goes this months spend.

There is no doubt, like countless others, I am addicted to the plastic crack that GW are pushing.

The latest box set proved no exception. It sold out in minutes on release in July and GW nearly had a customer relations disaster having promised that anybody who wanted one would get one. But GW are not the company they were ten years ago and within 48 hours announced that they would take orders for a few weeks and then do a second run.

Mine arrived last week and as is usual with GW the standards are very high. 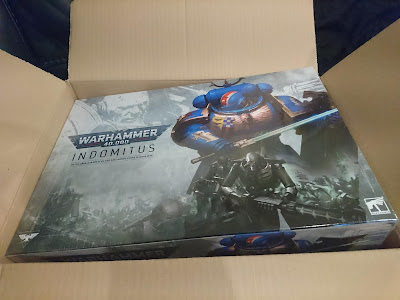 The back reveals the potential for a moulded plastic Nirvana. 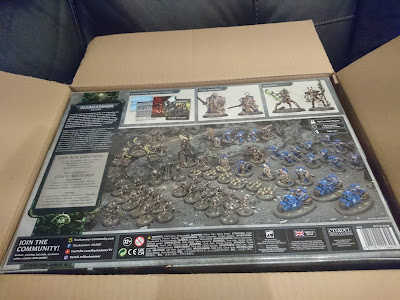 The GW Trolls like to tease with gorgeous cardboard sleeves before you reach the actual riches beneath! 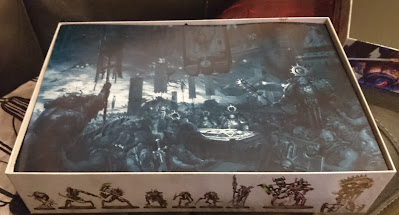 Finally the heavenly sprues are revealed in all their intricate glory. 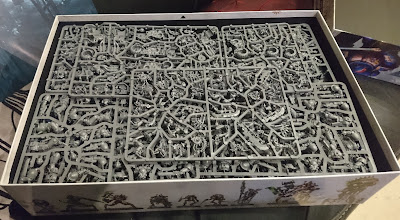 These are push fir models which GW have gradually been getting better at over the years. It does cut down the pose options but in general GW's figures are pretty much unique this doesn't matter. Hopefully a combination of quick assembly and the Contrast paints I drone on about incessantly will mean getting them to a table top won't take long. There are two armies Primaris Space Marines (as always) and Necrons.

In addition there is a scenario book: 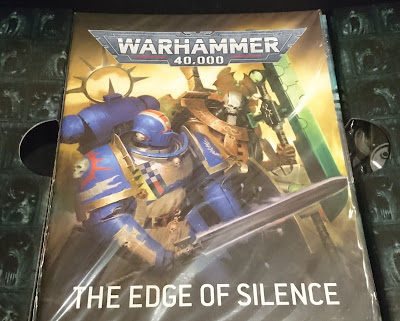 And a limited edition version of the new rules: 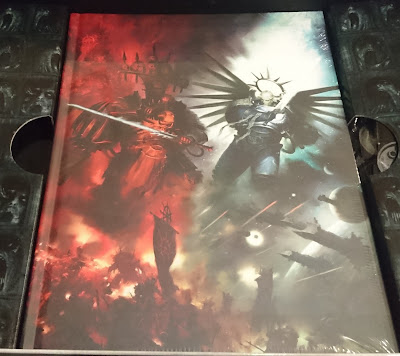 Guess I'm off to the Grim Dark Future, again.

Finished these units up a couple of months ago. First up some crossbows: 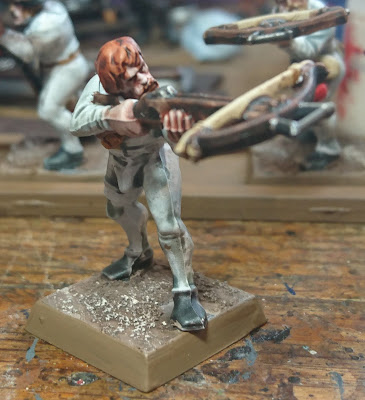 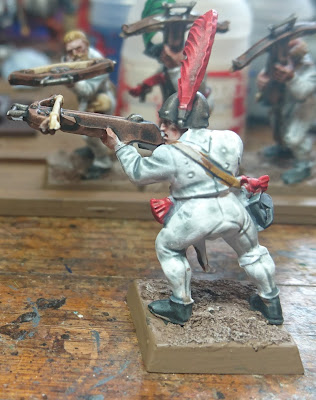 And an elite unit of Great Swords: 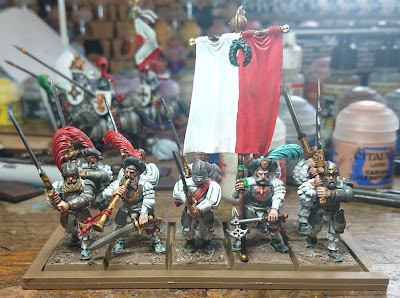 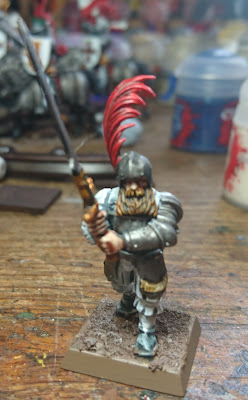 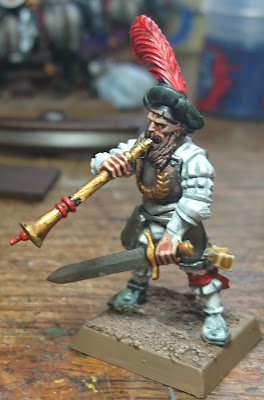 As the norm with me now when painting GW stuff, everything was done in Contrast paints under a white base coat for clothes and cream base coat for flesh. Metallics were finished off using standard acrylics. It's fast and good enough for my tabletop.

Before I got distracted by the Great Game, various Blood Red Skies aircraft and the odd Seventeenth Century Dutch ship  I was busy building some 6mm Napoleonic armies. Many of these I actually had commissioned but the Prussian army is all my own work.

There are 22 regiments in all, based on the assumption of three stands per unit, which should allow some major engagements to be fought. 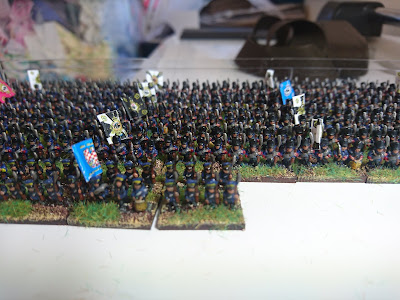 Next up are twelve Landwehr units (one already completed), a few pieces of artillery and then a huge amount of cavalry.
All figures are Baccus.

Just received a mat from Entoyment. Its a Deep Cut Studios' one designed for aerial wargames. Six foot by four it neatly covers most of the living room floor (fortunately the garage is available!).

That rarity of rarities on the Khaki Blog -a finished project. This fleet will hopefully soon see action as part of the naval campaign over at the League of Augsburg - Covid 19 restrictions allowing. 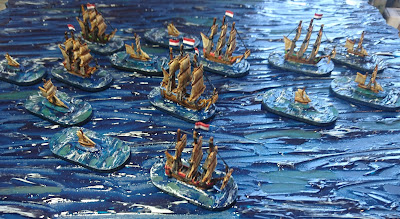 The main fleet in the campaign consists of: 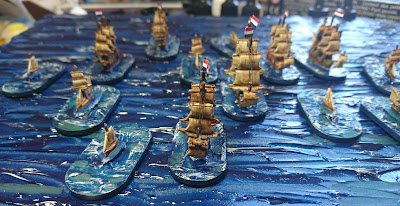 All models are from a Tumbling Dice starter pack. There were more ships than I needed as well as some Cromsters and Heokers. 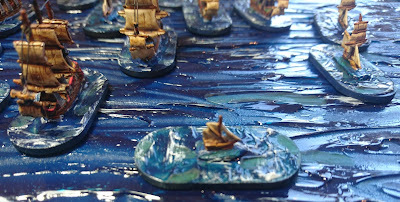 Some troops and a general to do Karl Franz's bidding. Nothing fancy with these, just straight Contrast on everything except the metallics. 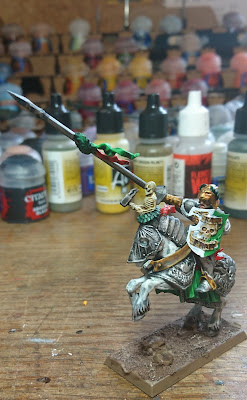 The Empire force is really starting to build now but I still have a few foot and mounted companies to complete before I can go for a force selfie. 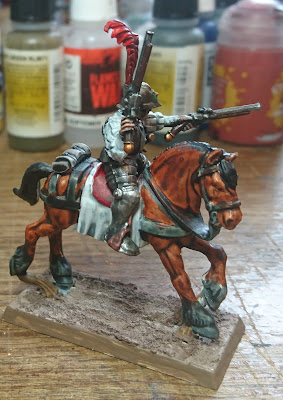 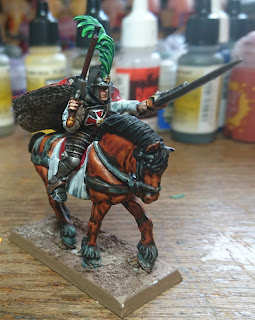 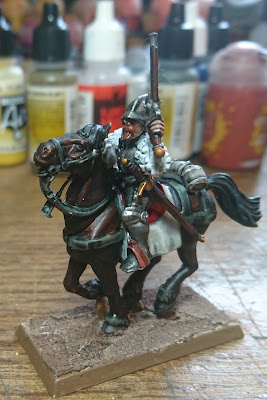