Way back in the mists of time my other half being fed a steady diet of Rome, I Claudius and Spartacus, kindly bought me the Hail Caesar starter set Conquest of Gaul.

These stoic chaps have spent three and a half years on the sprue before I finally got round to assembling them. 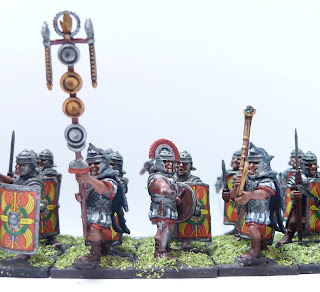 I wanted to get these done quickly.. They were swiftly undecorated with Leadbelcher spray which after a wash of black ink and quick dry brushed highlight did for the armour.

Red was a base coat, wash and edge highlight, anything brown met the same fate.

I cheated on the shields and bought some transfers from Warlord and gave them a light ink wash to dirty them up a bit. 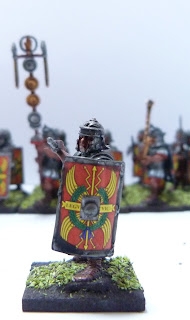 Basing was kept simple, the base was smothered in GW texture paint - Stirland Mud - and then flocked with a little cheap leaf litter.

There was also a little scorpion to do. 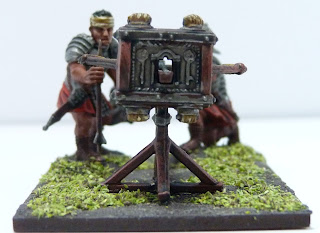 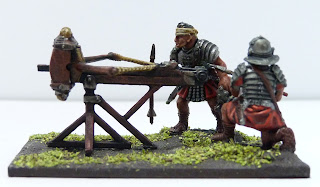 Regular perusers of this blog will have noticed a slight trend forming (ok two slight trends but I'm ignoring the 40K bit for now), the appearance over the last year or so of 6mm Napoleonics.

Up until now I have pretty much stuck with 28mm with the exception of some 15mm for Flames of War. But I have limited space to campaign, at a stretch I can set up a 12X6 table in the room formerly referred to as our garage (I know this is riches to many) but even at that size it's not going to be able to be transformed into Borodino or Austerlitz at that scale.

And that's before I get to thinking aout the figures required and the time needed to paint them - a constant source of moaning on these virtual pages.

So, I finally came to the conclusion that much as I love the pomp and well turned heel of the modern 28mm figure, if I want to recreate conflict in the grand Napoleonic manner then I would have to think small.

About 6mm in fact. This would give me a reasonable groundscale to fight the most famous Napoleonic conflicts at home.

Now I needed an excuse to get another mountain of lead past the better, smarter, purse-string holding half (a bit of indiscriminate flattery just in case she happens upon this article). Don't get me wrong the better half is very supportive of my hobby, partially as it excuses her dalliances with all things cross-stitch but mostly as it keeps me in a small controlled space where interaction with her friends and our neighbours is minimised, along with all the associated embarrassemnt that brings. The better half's main concern was,like most in the hobby, I spend much more time buying and painting miniatures than I do actually playing with them. Things get painted and then boxed away on a shelf without a chance of every answering a bugle call or more likely just get shelved and left unbuilt.

So I made a deal, I would indulge this diversion if I could purchase pre-painted units. I identified a couple of painters on eBay and after getting samples settled on one. This has proved a good way to build the collection, for a modest (in hobby terms) outlay I can receive a few ready painted battallions and all I have to do is base them and get them on the table.

Tricky bit over I thought; basing them, that sounds easy, then I made the mistake of looking on TMP for some rational deabate on the subject...
at 19:00 No comments: