So the month of June was desperately spent trying to regain control of the painted to bought ratio.

It was only partially successful though hugely helped by the fact that I was on a short sabbatical from work which resulted in a few days dedicated to brush on miniature action!

In the annals of science fiction war machine design there have been many that have appeared somewhat impractical. The AT-AT walkers of Star Wars bubble straight to the top of my mind, they certainly look good on the big screen when being pestered by Luke Skywalker and his rebel cronies in their speeders but are they really a good design for warfare?

I doubt they have a low radar profile, to be honest they are so big they would probably turn up on my car's GPS. They certainly don't do stealth with those reverberating, ponderous, titanic footsteps and whilst we are on the subject of ponderous footsteps, I guess the top speed isn't going to get the people at Top Gear excited (though some of the optional extras - large laser battery etc. might make it a more attractive buy).

But, they are not the most impractical design I've come across, that definitely belongs to GW's Chaos Defiler. Six legs, so I guess it might scuttle speedily, except the front two have huge mechanical claws which when coupled with the spindly mid and back legs does give it some balance issues. As with AT-AT it's not going to be stealthy (when is Chaos in 40K - ok I did not see the Alpha Legion coming but who does?) and it does come with its own daemon which may cause a little dimensional instability or random consumption by the warp. 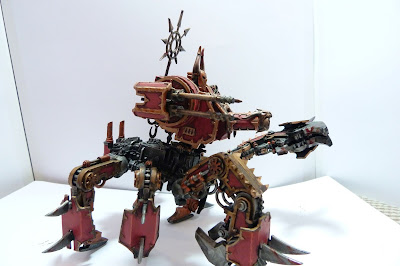 It is spikey though and when it comes to chaotic optional extras you can never have enough spikes upon which to impale the deluded servants of the false emperor, can you? 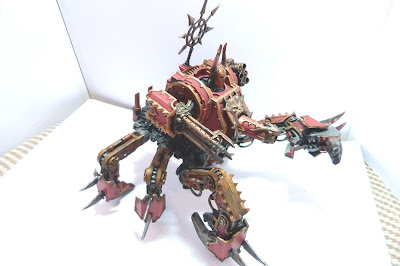