Finally after years of resisting I’ve succumbed to Warhammer and decided that I need to build an army. The first major decision is of course which one? It ended up being a choice between the Orcs and Empire. The Empire won out as I have always been intrigued by the mix of pike and fire arms plus I’d actually spent the past couple of years building and painting an Ork army for Warhammer 40K.
There’s only so much Goblin Green a man can take.
Anyhow first up on the list is always some characters, that way I can make decisions on colours and heraldry and then let them permeate down into the rank and file. 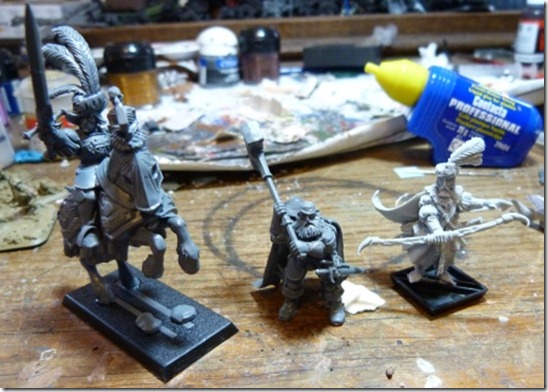 The two on the left are from Citadel’s Empire Generals plastic set and the one on the right is Markus Wulfhart from the Citadel Finecast series. All ready for some undercoat.
And would you look at the size of the chap in the middles warhammer? What’s not to like?
at 11:11 No comments: