"Gold Section was sent up to patrol above a convoy. Forty minutes in they were vectored to intercept approaching Stukas but before they could reach them they were bounced by two ME 109s. First anybody new of them was when the cannon shells started…"

This encounter is based on an engagement between 501 Squadron, flying Hurricanes, and some ME 109s. 501 were patrolling above a convoy off Dorset on the morning of 12th July when radar spotted inbound bombers which turned out to be Ju 87s. The Hurricanes turned to face them but before they could engage were jumped by enemy fighters.

The set up was simple, Gold Section led by Dermot Reed was flying in vic formation and two ME 109s were deployed behind them. I didn't have much hope for 327s performance given the results of the previous two sorties and none of these games were going to be particularly fair.

And it didn't start well for the RAF, two aircraft being disadvantaged from the set up rolls and the Luftwaffe closing fast. The first 109 got a bead on Buckley (flying X), maneuvered onto his tail but completely missed.
The second bandit could only get a deflection shot in which also missed.

The Hurricanes broke, Buckley and Reed climbing to get to neutral and Blaiden who started advantaged burning some of that so he could perform a 180 and face the enemy.

Round 2 - the Germans continued to close but didn't have advantage so couldn't shoot. The other two Hurricanes burn advantage to face the enemy. No shooting occurred.

In the next round one 109 made a head on attack on Reed resulting in a saved hit but in this game that's still a boom chit.

The second 109 also made a head on attack on Reed and hit him. This time Reed failed his save and became disadvantaged.

Blaiden was next to move burning advantage to get on the tail of a 109; he fired but missed.

Buckley moved and tried to outmaneuver one of the enemy but failed.

The turn ended with the RAF having 2 boom chits and the Luftwaffe none.

Next turn started with a ME 109 getting behind Reed who was still disadvantaged. Fortunately for Reed and the RAF the German pilot missed.

Blaiden was still on the tail of the other enemy fighter and this time he hit! The German failed to save and, as he was already disadvantaged, was shot down. 327 had their first kill!

They also had their first victory, the Luftwaffe now had two boom chits and only one active plane, so the game concluded at the end of that turn with no further shooting occurring.

501 didn't fair so well in reality. A Hurricane and pilot were lost. The Stukas were intercepted by six Spitfires of 609 Squadron but they in turn were hit by a large escort.

"F-H was delighted that 327 had opened its score. As soon as we were stood down the lot of us decamped to a pub a couple of miles from the airfield. We were on our second or third pint of something peculiar when Collins turned up, hardly a scratch on him after his escapades yesterday. His re-appearance boosted the sense of celebration. I think F-H was pleased to see him, though you wouldn't know it from the greeting, 'Where the hell have you been?' he bellowed followed rapidly by, 'And where's your bloody kite?'"

Inside the Lego Box

Readers of the blog will know I was gifted a rather large Lego kit for my birthday in December. Well, here's what's inside the box!

Email ThisBlogThis!Share to TwitterShare to FacebookShare to Pinterest
Labels: Lego

The Return of the Monthly Count

Way back in the mists of time, alright 2018 (but at my age that's foggy) I stopped maintaining a monthly count of troops painted to troops bought. This was mostly due to needing to concentrate on painting cuirassiers for the Great Game.

But now I feel that hobby urge to prove I am painting more than I purchase and so the Monthly Count returns, complete with handy widget to the right!

So the count for January

I doubt I will have such a productive month again, there was a lot sitting on the desk just waiting to be finished off!

And of course no purchases... but Mad for War is here so that will change.

Email ThisBlogThis!Share to TwitterShare to FacebookShare to Pinterest
Labels: Count

"The C.O. was furious. I thought a vein in his head was going to pop when he heard Lewellyn was missing. There was a bit of muttered invective which won’t grace the pages of this log followed by a ‘Show them how its bloody well done’. Scramble went at 11.15. Another lone raider, Fletcher-Hove as good as his word took Red Section up."

Game 2 was again a small practice game with a very similar set up to game 1. Squadron Leader Fletcher-Hove took up Red Section with Pilot Officers Collins and Reynolds as his wing men. Interestingly both P.O.s had a rating of Regular where F-H was a Rookie; I took this to mean that F-H was either not a good pilot or wedded to poor tactics.

To make it a little more interesting a solitary ME 109 was introduced to defend the Junkers.

In the first round Collins and Reynolds went after the ME 109 whilst F-H tried to get into position to take a shot at the Junkers. The Ju 88's movement took it past Collins who gave it a blast and completely failed to hit the target. Meanwhile the ME 109  zipped in and outmaneuvered F-H which meant he lost an advantage level.

F-H took a shot at the Ju 88, moved and then fired again but with the predictability of my die rolling failed to hit both times. Meanwhile Reynolds decided to go after the bomber too and there was another exchange of fire resulting in... a hit for the Luftwaffe.

By this time the ME 109 was in among the Hurricanes and found itself with their tails in its sights.

There was another exchange of fire between Red Section and the Ju 88 resulting in another hit on the Hurricanes, though at least this time the RAF managed to hit the bomber, once.

But that pesky 109 now opened fire hitting Collins who failed to save and thus, being already disadvantaged, was shot down.

This meant that once more the RAF had more boom chits than engines and so had to retire. Another Junkers had escaped.

"Nobody seemed to know what had happened to Collins and there was no chat on Red Section's return. Two sorties and two missing pilots you knew everybody was wondering who'd be next..."

This was item 5 on the New Year list. Black Seas Starter Set from Warlord games.

"Low cloud and showers today and finally after weeks of sitting around the Luftwaffe appeared. Green Section scrambled at 0730 after reports of a lone raider on a recon. Cloud broke at 10,000 feet and Ball spotted the bandit, Ju 88"

This was the first flight for 327 squadron and my first game. It is based on an encounter on the 10th of July between a Do17 on a reconnaissance mission and three Spitfires of 66 Squadron based out of Colitshall. Since I don't have a Dornier, a Ju 88 was used as a surrogate. 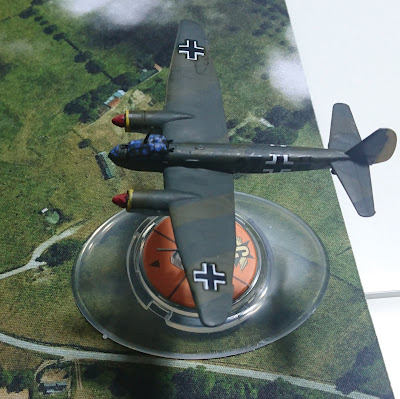 In the first turn everybody climbed for advantage. Bourne and Llewelyn moved for a head on attack whilst Ball peeled off and tried to get on the 88s tail. The 88s goal was simply to traverse the board which seemed unlikely given it had to travel six feet at five inches a move pursued by three capable fighters.

Hopefully an easy first blooding for 327 or so I thought.

Bourne got in a shot first, completely missing the target.
The Ju 88 fired back with its pathetic single dice and, as is so often the way in wargames, scored a hit on Bourne. After its move the bomber took a shot at Llewelyn too but completely missed.

Llewelyn then flew right past the 88 guns blazing and missing. He then burned advantage so that he could turn 180 degrees and find himself on the bomber’s tail.

Ball meanwhile was still trying to get on the tail of the Luftwaffe plane. Clearly some practice was required.

The next round, before moving, the bomber took a pot shot at Llewelyn and managed to score another hit! The RAF had two boom chits now which meant they were halfway to losing what was meant to be a straightforward combat.

And just to prove the dice gods desert me even when I’m on my own the 88 got another burst in at the end of its move and poor, hapless Llewelyn was shot down. The 88 had rolled three consecutive sixes and the RAF had failed to roll one despite having twelve attempts.

That gave the RAF more boom chits than planes and the Junkers slipped into some handy cloud cover and made good on its fortune.

“Only two Hurricanes from Green section returned. Neither was sure what had happened to David, Ball had seen his plane smoking and heading for the deck but had lost sight of it…”

This is gong to be one of those state of the projects posts, it being a new year and all, so you may want to click away now.

2020 started with probably more gaming than I've done since my teenage obsession with rooting through imaginary dungeons to nick gold from dragons. First up was a Sunday of Gaslands Revisited a very chaotic, fun game best played under the influence. This moved on to a few evenings of 10mm Ancients using the Milites Mundi rule set - one of those which builds up to a crescendo with the outcome being determined in the last couple of turns. I also was lucky enough to have a day playing the upcoming Mad for War from the League of Augsburg which is an immense amount of fun (the release I'm looking forward to most in 2021) and resulted in the purchase of many tiny, tiny Dutch ships.

Sadly these have yet to see action, confined to port when the pandemic struck. Like many other hobbyists this led to a near cessation of gaming (apart from a couple of fun Western shoot outs via messenger) and a concentration on clearing the plastic/resin/alloy mountain. This was quite successful and I find at the end of the year I have finished off a few planes, a 6 mm Prussian army and an inordinate amount of Warhammer pieces of both Grim and Sigmar flavours.

Towards the end of the year I felt a need to start doing some gaming and began a Blood Red Skies campaign using my under utilised garage set up. Some battle reports are forthcoming on this.

But its all felt a little haphazard, so this year I have decided to formulate a plan, well a list really but plan does make it sound I've put some real thought into it!
This is to try and get me to actually finish projects instead of leaving them half done or worse in their original packaging.
That I think will do, the stretch goal is simply to play a game or two with people in the same room. And I already have a mad plan for 2022 involving the Great Northern War played across three League of Augsburg formats Donnybrook in 28 mm, Mad for War to get some combined arms in and finally Beneath the Lilly banners but in 6 mm (with this scale I reckon I can fight the whole of Poltava in the garage).
But that's for another time.
All the best for the New Year, stay safe.