This is the calm before the storm - at least as far as buying is concerned! Next week sees a trip to Nottingham... carnage will ensue (of a plastic die rolling kind).

My parents' cavernous loft* is often the source of half forgotten wonders of yesteryear and recently I rediscovered a battered copy of Avalon Hill's Napoleon's Battles from way back in 1989. 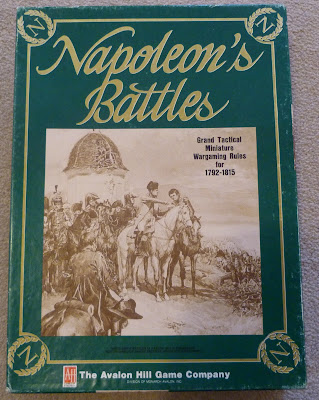 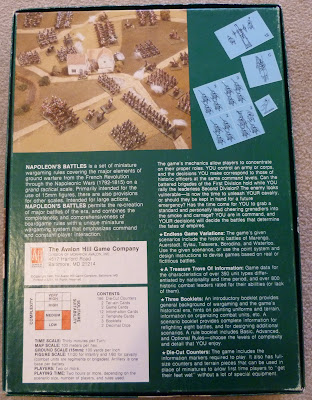 This was the second set of Napoleonic rules that I purchased, the first being To The Sound of the Guns (which I'm sure is concealed under a box or a bag somewhere).

Unusually it tried to be a complete game and even came with a scenario book which included design notes and a guide to collecting and painting miniatures which I have discovered contains a wealth of detail including army strengths and limber colours.

There was even stats for less fashionable players such as Sweden and the Ottoman Empire.

Die cut counters which could represent armies and some 2D terrain was also supplied.﻿﻿﻿

I recall I only played two games of the rules and don't remember much of them. The first was a scenario from the book which used the counters to portray a fictitious battle in 1794 between a French and Prussian force. The second was a battle I made up on the hoof based around my collection of 1/72nd scale Esci Napoleonics. The British won but that might have been more down to me favouring the home side and a burgeoning relationship with all things Sharpe.

Looking at the books now, what strikes me most is the typeset of the rule set; it's very close making it difficult to read and reference (to be fair this was the norm for Avalon Hill - I own several other games - and that period).


This was not a cheap product at the time but when compared to something modern like the excellent War of Three Kings (BLB 3) it is easy to see how far the quality and production of wargames rules has improved in the thirty or so years since Napoleon's Battles was made**. I could probably produce something better than Napoleon's Battles with it's grainy pictures and numbered paragraphs on my laptop with very little effort (and it's five years old!).

Will I play it again? Perhaps, but I would need to read that rule set and although it is only 34 pages that's probably 94 in modern terms! The temptation is high though, it's not called nostalgia for nothing and I now have the armies to do it justice.


*a misleading term it has windows and central heating as well as being of a size where you can comfortably practice your pitching if golf is your thing, Would I like to get a wargames table up there

**sorry did I just type THIRTY years - what have I been doing for that time. Think I need a lie down somewhere shady, maybe with something cool and comforting to get over that.
at 19:00 2 comments: